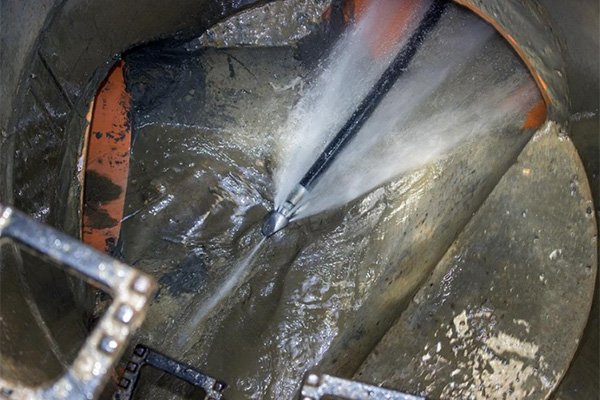 “Hydro Jetting is a non-invasive plumbing solution that clears pipes by removing blockages effectively. It involves the use of high-pressure water jets, which can remove debris, clogs, and buildup from the plumbing system.

Plumbers prefer hydro jetting when the water system is impaired with severe clogs that keep recurring. The interior of pipes often scales up with debris, grease, and mineral buildup, which causes clogging and slow draining. When this issue escalates, it can result in sewer backups. So if the plumbing system blocks up, dirty water may make its way into your home.

Hydro jetting solves such drain issues by pumping high-pressure water in the pipes. The jet works with gravity and forces the pipes to clear up.”

Water jetting is the next logical step when traditional unclogging methods fail. Usually, a drain auger will clear a clog that is small to medium in size. However, if such a clog is primarily made of residue or grease buildup then the auger will just punch through the hole instead of pushing the debris entirely. Once the auger has retracted that hole will usually plug up again leaving you frustrated.

The team at DC Annis Sewer uses water jetting as an effective method for clearing the peskiest of clogs. If you’ve tried other means for removing a stubborn clog without success call us at 612-861-6425 to set up an appointment. You may also visit our water jetting page to learn more about this service.

Flushable wipes don’t really live up to their name