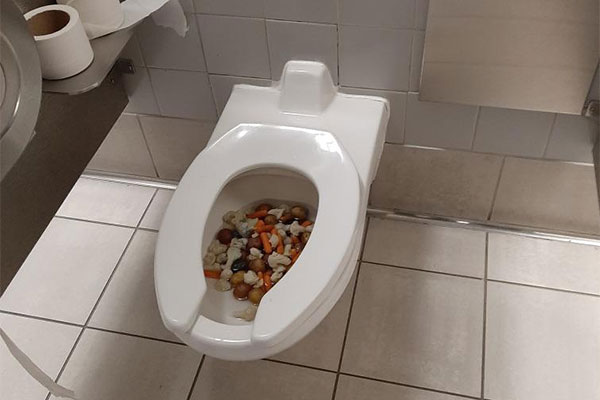 “Willa Murray, a timber frames worker and carpenter living in Ontario with her boyfriend, filled Narcity in on the root (vegetables) of her findings at a Pearson Airport bathroom near gate D that has left the internet… stewing.

It all reportedly happened on Friday, April 22, when Murray was stuck at the airport for three hours because her flight was delayed as she made her way home from the Yukon.

“I could never have imagined what happened next. I opened the first stall door and, as we all do, I checked to see if this toilet was suitable for what I had planned. But someone else had different plans for this toilet bowl: it was clearly the beginnings of a stew,” Murray said.”

Check out the full story here.

In the snapped photo by Ms. Murray, you can clearly see a wide assortment of veggies. These include carrots, small potatoes, cauliflower and more. The reason for the dumping will likely remain a mystery. Perhaps the bigger question is who would bring raw veggies to an airport? Fortunately for the staff the culprit didn’t attempt to flush those vegetables.

At DC Annis Sewer we’re used to all sorts of weird items causing clogged toilets. If your business or home has a stubborn toilet clogged, call (612) 861-6425 to have one of our technicians resolve the issue.